Beijing Railway Station is intense. It feels like an airport with all the gigantic architecture, but the thing is when a train arrives, it turns mosh-pit. In China, rail is serious business. They even X-Ray your baggage.

The departure boards probably had around 50 trains listed, and over how many platforms I have no idea. I do know that when we went to the departure lounge-like waiting room on the way to the platform, it was waiting room #13.

Back when I was leafing through the tour notes, a sleeper train didn’t seem like a bad idea at all. After all, my only notion of sleeper trains had come from 1950’s films.

My preconceptions of a sleeper carriage: 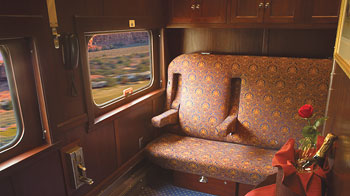 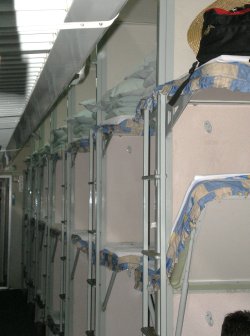 Around 60 people to a carriage, triple decker bunks, and just about the only door on the carriage is the one on the heinous squat toilet. It’s a barracks with wheels.

The top bunks are roughly 8 feet in the air. I was in a middle bunk, and an elderly couple had the top bunks. Before I could figure out how to offer to swap bunk assignments, they had scrambled up top with surprising nimbleness. Good on them.