2D Boy, the developers of the indie classic, World of Goo, recently concluded a promotion where customers could name their own price for the game. They’ve released a ton of information about how much people paid and why they chose the price they did. There are two datasets, 57,076 units were sold in total, and 4,095 people completed an after sale survey (at the time I requested the survey data).

2D Boy are doing their fellow developers a fantastic service here. If you’re trying to price your games, you couldn’t ask for more pertinent data.

Here’s a histogram of unit sales versus price:

Here’s the same data, multiplied out to find the revenue versus price: 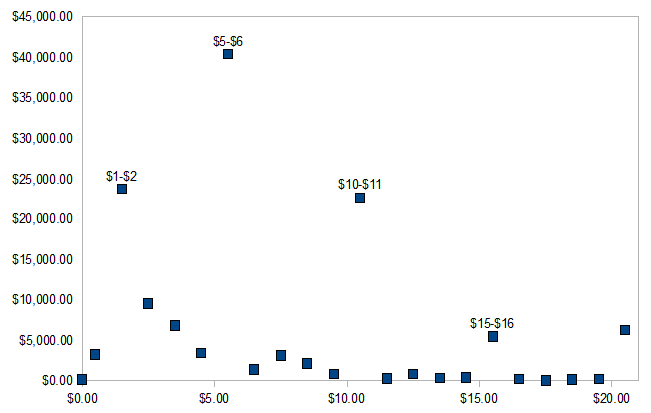 From the survey, here are the reasons why people chose their prices: 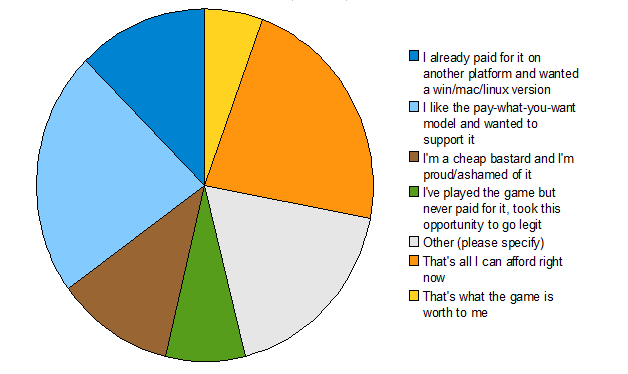 The segment of reformed pirates is about 10%, which is disappointingly small, considering the very high piracy rates that 2D Boy have alleged.

It’s interesting to see a significant number of people using this as an opportunity to pick up the game for a different platform, especially since if you bought it from 2D Boy back when it was first released, they gave you download links for Windows, Mac and Linux. I’m tempted to interpret this segment as people who bought it from WiiWare, disliked the imprecision of the wiimote, and bought it again for PC to play it with a mouse.

The graph gets far more interesting if you break it down by the price chosen: 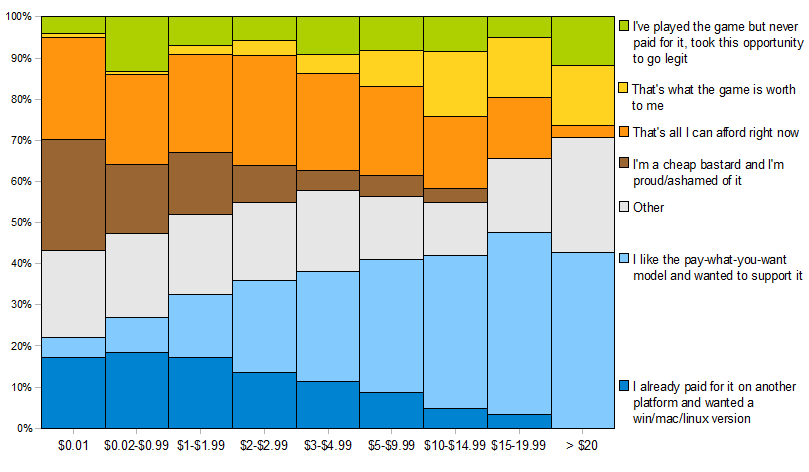 Now, bear in mind that a large majority of the revenue came from prices $5 and over. The grid’s right-hand half is where the money was made. Notice how nearly 40% of that side chose their price because they wanted to reward 2D Boy for using this business model. If pay-what-you-want becomes the norm, it’ll no longer be a novelty, and those customers will start paying what they feel is affordable. The novelty factor could be boosting 2D Boy’s revenues by up to a third.

The survey also asks how much the game should ordinarily sell for. You get an entertaining graph if you put that against how much people actually pay: 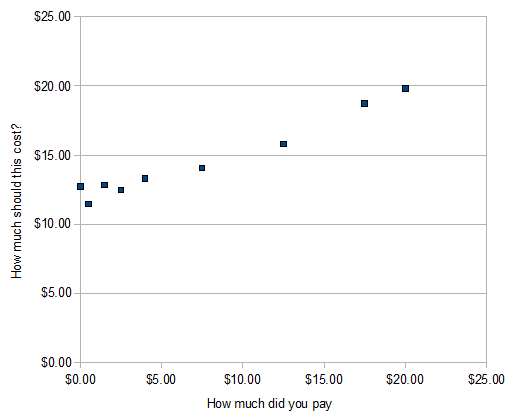 See, this is why market research surveys are full of shit. People will tell you one thing and then act completely differently. There’s a general consensus that World of Goo is worth at least US$12, but on average people paid US$2.03 for it.

It’s said that a thing’s only worth what people will pay for it, but if you give people a bargain and a fair price, and they’ll take the bargain.