My non-Mostly Tigerproof work is coming to a close, and I’m back to prototyping weird ideas again. This time the theme is pinball.

I’ve always loved pinball. During the 50-ish years between the advent of flippers and coin-op pinball’s commercial collapse, it has become a well-tuned and richly elaborated class of games, so it might not be obvious why I’d choose it as something to try to improve upon. In spite of how much refinement it’s seen, I believe the game still has glaring problems.

I play vastly more video pinball than real pinball. I grew up on video pinball, as did nearly everyone younger than me. In some ways pinball is poorly adapted to what is now an overwhelmingly software-based existence: 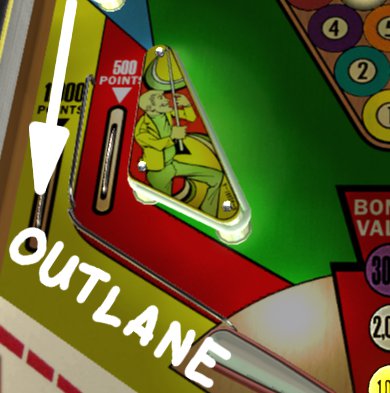 I think pinball’s most fundamental drawback is its uneven learning curve combined with its heritage as a game of chance. The challenge in pinball is directing the ball to where you want it to go. Catching the ball in the crook of the flipper is easily learned, but it takes precise timing to shoot at the angle you intend. A pinball will roll off a flipper in a second. During that second, the resulting angle of the shot varies by 60 degrees or more. What’s worse is that most of that variation is compressed towards the tip end. Each frame matters.

It’s wonderful that pinball rewards such high levels of finesse, but it’s hateful that even after hours of practice, beginners find their performance is dominated by random chance. Even when they do achieve things, it’s hard to take pride in it with the knowledge that flukes outnumber intentional shots. I think pinball should do a much better job of reflecting the player’s intent, even if their timing isn’t dead on. I’d love to bring the experience of being good at pinball to a wider audience, while giving old hands even greater challenges.

Those are my high-falutin’ design goals. More on my specific approach in the next post.